“Lord Rabayar, your father has confirmed you as Count of Avreux…in return for your heroic defense of…”

“Damn it all Baldric!” Robayar snapped. “How will I ever prove my worth sheparding peasants!”

“Lord, the county includes 20,000 acres of prime land, access to river trade with Languille and is not too distant from Couronne….”

“It is but a trap to keep me from the quest!”

“Robayar!” an elegant female voice called. “My mistress Melisandre has felt a tear in the veil between worlds” spoke the Damsel Eloise. “Pestilence comes!”

“Excellent!” Robayar chuckled. “Summon the host Baldric. We might find the lady’s favor this day!”

(KotR) 13 Cavalry, Knights of the Realm

J is one of the tougher players around here and I’ve been fortunate to face him a few times. Our games are usually practice games for upcoming tournaments so we just play battleline with very simple terrain. In this case, 2 hills, and 2 mysterious forests.

My chief concern with deployment was to try and box his Nurglings out of my deployment zone and to also protect my trebuchets. I deployed the bowmen first and then filled in the gaps with my other units. Once he deployed his Nurglings, I backed my Peg Knights up a bit with their Vanguard move, to make it difficult for him to get them out of my front arc.

All 3 of his heralds were level 1 Wizards and all 3 took the Flame Template Nurgle Spell – I believe it is Stream of Corruption & his BSB rolled the Plague Flail as a gift.
His Greater Unclean One rolled: Plague Wind, Curse of the Leper, Fleshy Abundance, & Rancid Visitations & his gifts were Unbreakable Skin 2+ & Incorporeal Strike (not good!)

Movement:
1. The Forest ended up being a Venom Thicket – so now the Nurglings are stubborn with poison attacks. Ugh
2. Everything else moved up!

Magic: I’m not sure what happened on the Reign of Chaos Table – No wounds were suffered
1. After channels it ended up being 12 v 6
2. He used 3 dice on Rancid Visitations at my Men @ Arms – I let it go – 4 were killed.
3. He used 4 dice to put Curse of the Leper on the Men @ Arms – it went off with Irresistible Force – He rolled Magical Feedback – putting 1 wound on a herald and lost his remaining power dice. 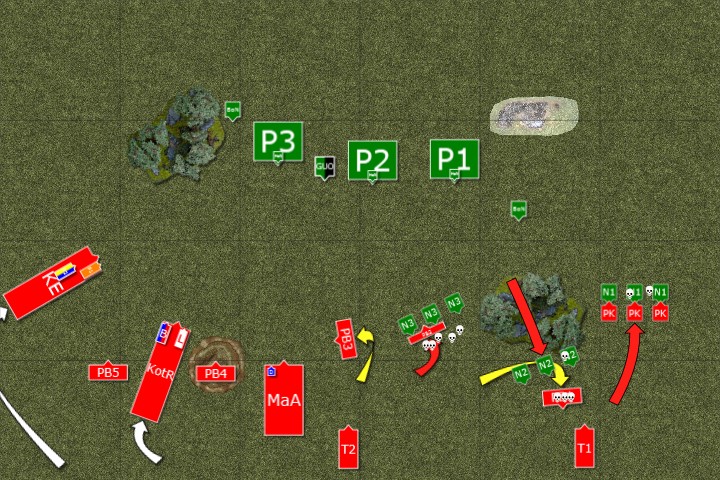 Movement:
1. I was in a difficult position here as his Nurglings could just go between the gap in my Peg Knights and right most bowmen unit – so I did something controversial. I charged the bowmen on the right into the Nurglings to try and hold them up for as long as possible – my other option would have been to reform as wide as possible and back the peg knights up and to the left. It might be unclear here, but the bowmen were maximized to be within 6″ of the Peg Knights for leadership.
2. My Peg Knights went into the Nurglings on the right.
3. To compound all of the controversy, I decided to charge the other 2 units of bowmen into the left most nurgling unit. I figured between a flank charge and 2 units – I might be able to take them – how wrong I was though….
4. I wheeled my knights up and to the right to try and start setting up some charges.

Shooting: My worthless peasants failed me!

Combat: My worthless peasants failed me….again!
1. My noble Peg Knights only managed to inflict 1 wound to the nurglings, I took none in return, won combat by 2, and he lost 1 wound to instability.
2. My bowmen in the forest became frightened, inflicted 1 wound, took 3 in return, broke 8″ and were pursued 7″.
3. Both of my other bowmen became frightened, inflicted 0 wounds, the front unit took 5 in return, but stuck. Unfortunately, the unit on the flank hightailed it for the salt mines.

Movement:
1. His nurglings charged my bowmen off the board. He attempted to redirect to the trebuchet and failed, stopping a few inches from it.
2. Plaguebearers charged my other fleeing bowmen unit. They fled through the Men at Arms and stopped just short of the board edge.
3. The rightmost beast of Nurgle moved up to threaten my left Trebuchet.
4. The left Beast of Nurgle got out of the los of my KE.

Magic: 6 on the Reign of Chaos for the Random Nurgle Effect – Dice were 6v6 after channels
1. Nurgle killed 4 of my fleeing archers.
2. My bowmen to the left of my KotR took 3 wounds
3. He cast Curse of the Leper w/ 2 dice on my Men at Arms – T reduced by 1
4. He tried to cast Plague Wind – rolled high – I scrolled it.

Combat:
1. My Peg Knights did 3 wounds and took 1 in return. After instability he lost another wound.
2. My bowmen were killed to a man by the Nurglings – they reformed to face the left trebuchet.

Movement:
1. My Men at Arms attempted a long charge at the left most unit of Plague Bearers. They stumbled up 4″.
2. My KE wheeled and backed up a bit. I should have just reformed them wide and faced them toward the Beat of Nurgle – or just ignored it.

Shooting:
1. My Treb managed to land a rock dead on his Greater Unclean One – and only did 1 wound….

Combat:
1.My Peg Knights became Frightened – They inflicted 1 wound and took 1 in return losing a model. 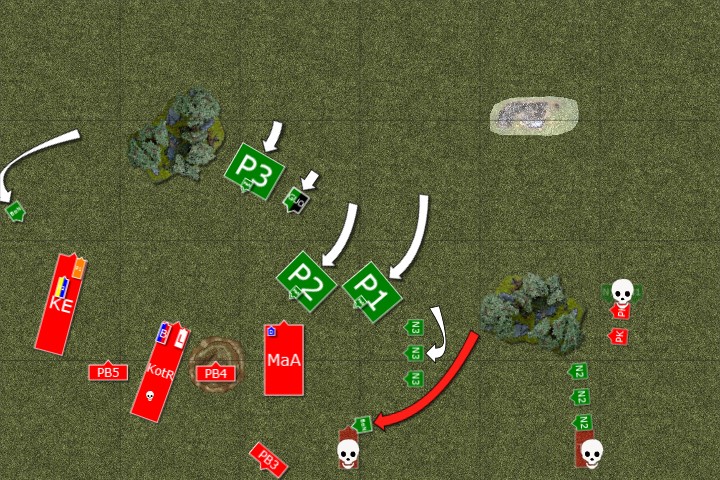 Movement:
1. Nurglings charged the Treb
2. The Beast charged the other Treb
3. The rest of his line moved up.
4. That damn Beast of Nurgle moved out of my front arc – again…

Combat:
1. My Peg Knights remembered they were knights and dealt 4 wounds taking none in returned – the remaining Nurgling Popped after instability.
2. Both Trebs were massacred and he reformed to face the center

Movement:
Sensing that the moment was slipping away I made some bold maneuvers.
1. My KotR and Men at Arms went into the Front of the closest Plaguebearer Unit – Spacing is all jacked up, because of the hill and bowmen, we somehow got it to work on the table.
2. My KE turned to threaten a counter charge – offering up their flank.
3. My Bowmen Fled off the board.
4. My Peg Knights moved to Threaten some rear charges.

Combat:
1. My General got 1 wound through on a Herald. Everyone else did nothing!
2. 1 Men @ Arms was killed – I won by 1, but he took no further wounds from Daemonic Instability. 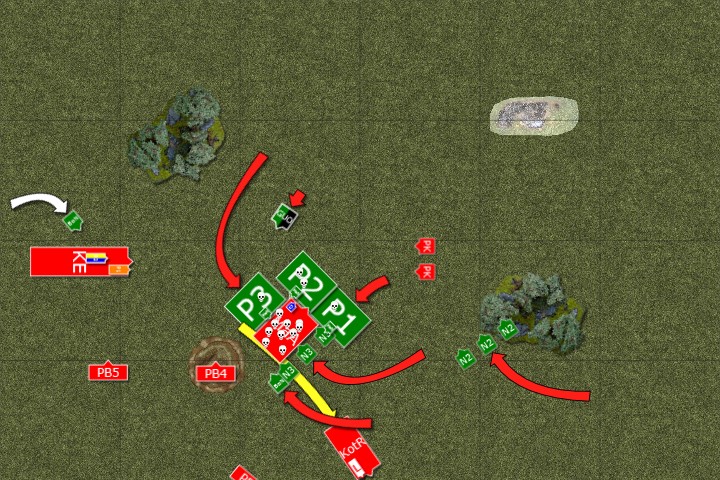 Movement:
1. The Greater Unclean One failed his charge and stumbled up 2″
2. Everyone Else charged in.
3. The other Nurglings moved to threaten my Peg Knights.
4. The Best of Nurgle continued to hang out and aggravate me.

Magic: Dice were 11 v 6 – All of his guys got +1 to their Ward Save
1. He Cat Curse of the Leper with Irresistible Force on my KE, reducing their toughness by 1. He rolled Feedback, but all of the Wounds were saved.
2. I Crushed Rancid Visitations with my 6 dice.

Combat:
1. My General whiffed, My BSB got 1 through, my Damsel died.
2. I lost 1 KotR & 10 Men @ Arms.
3. I killed 1 PB on the Flank, 3 in the Front, and did 2 wounds to the Nurglings
4. My Peasants stuck due to steadfast – however the KotR broke. We randomized the direction and they went through the Men@ Arms.
5. His P3 unit pursued into my Men at Arms to complete the peasant sandwich. 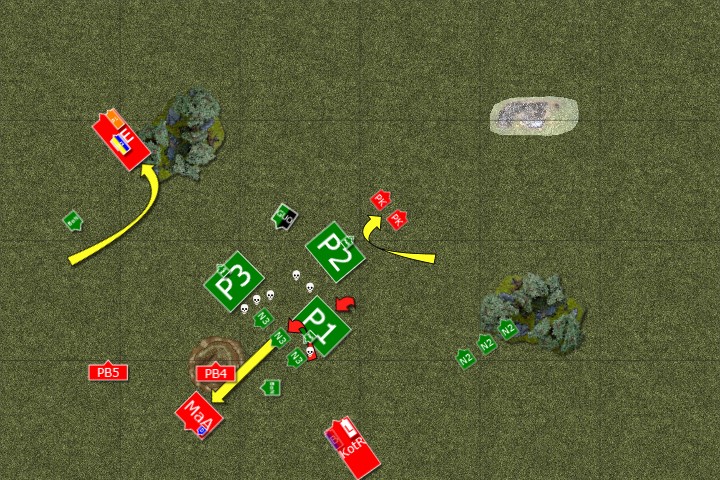 Movement:
I wasn’t really sure what to do here. I thought about charging his Greater Unclean One with my Knights, but I instead decided to commit them to the big combat. I was hoping that with 2 rear charges and the Wyrmlance on my Paladin, I *might* have a chance at holding this combat – rallying my General and charging again during my Turn 5. Alas it was not meant to be!

1. KE and Pegs into the rear.
2. General’s unit rallies.
3. Both Bowmen were turned to potshot that Beast of Nurgle.

Magic: 4 v 3
1. I threw 4 dice at Flesh to Stone – He dispelled it with Irresistible Force.

Combat:
1. My KE only killed 3
2. My Pegs got 2
3. The Men at Arms put 2 on the Nurglings
4. 1 KE died
5. 17 Peasants were killed.
6. Everything Broke – Including my Stubborn and Steadfast KE! (Who went through the woods and fell off their horses!)
7. Miraculously everything got away and the Bowmen didn’t flee.

Movement:
1. He tried to charge my KE off the board. They only went 5″ though.
2. He charged and caught my Peg Knights.
3. The Nurglings also attempted to charge my Men at Arms – he rolled low and I did too thankfully.
4. He moved the other stuff around to box me in.

Magic: 6 v 5 – Rot Glorious Rot Again
1. The bowmen on the left lose 2 and flee right to the table edge.
2. 2 KE also were killed by Nurgle.
3. I stopped Curse of the Lepper w/4 of my dice.
4. Rancid Visitations failed to do any wounds to my KotR.

Movement:
1. I went for the gusto – my KotR threaded the needle and charged his general. I was hoping for a Heroic Killing Blow, but not much else.
2. My KE rallied.
3. The bowmen and Men at Arms fled off the table edge.

Combat:
1. He challenged my General and I answered. Unfortunately I whiffed, and took 2 wounds for my trouble. I won by two so the combat would continue next turn.
During Nurgle 6 he just backed his Plaguebearers up to protect the rear of his Greater Unclean One from the KE. My general was killed in the challenge and my bowmen were wiped out. My Knights held on an 8

Reflection:
1. Man this was a butt whooping. I only felt like I made one glaring mistake (not reforming the KE wide to box out that Beast of Nurgle during turn 2) and still just got clobbered. Sure using the bowmen in combat was questionable, but I’m still not sure how I could have kept them from the Trebs. I would like to think that 20 guys can take some Nurglings, but apparently not.
2. The big combo charge was a real let down. Against an army that can break that would have probably been quite successful. Unfortunately, Regen, -1 to hit, & Daemonic Instability really stuck it to me.
3. I think this match up was about as tough as it gets for Bretonnia. I just felt outclassed across the board.

Robayar rolled away from the putrid mass of the Greater Unclean One and swung into the saddle behind Sir Baldric.

“Where is the bloody standard Baldric?” Robayar asked groggily.

“I had to leave it behind Lord. Fortunately, Melisandre has felt a weakening in the winds of magic. Our valor has been rewarded by the Lady. The Daemons are fading.”

“Once my wounds have been bound, gather the Yeoman Wardens” Robayar commanded. “Those faithless peasant swine that fled the battle are not long for this world.”