This was my first test game with the New High Elf Book. I was pretty excited to get it in as I am preparing for a big 2400 point tournament in July and I wanted to see if this list concept is sound.

My opponent played an interesting Ogre List that I don’t think is quite tournament ready. His Magic Phase was pretty wimpy and he had no bsb.

I don’t have a copy of his list so I’m not exactly sure how the characters are equipped. 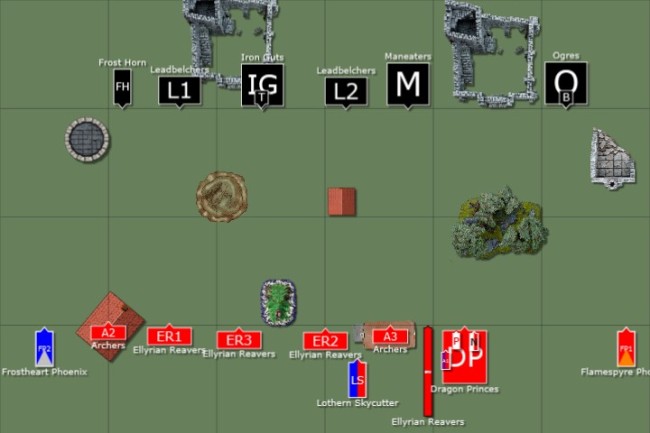 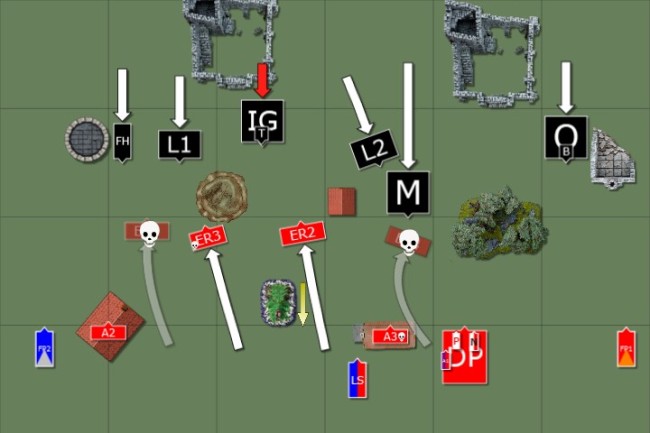 Movement:
1. His Ironguts declared a charge against my middle unit of reavers. I chose to flee and went 10″. The guts stumbled forward 4″. They ended up about where that yellow arrow is pointing.
2. The frost mammoth and belchers on the left moved up.
3. I don’t know why he did this, but he moved the leadbelchers up to support his maneaters which set up a very juice charge opportunity for my Dragon Princes.

Magic: Winds ended up being 2 v 1
1. His Tyrant had the Ruby Ring of Ruin and tried to shoot some reavers. I dispelled it w/ one dice.

Shooting:
1. His maneaters torched my reavers. In hindsight, I shouldn’t have moved them up like I did as he couldn’t have charged this turn anyway.
2. His Leadbelchers behind the Marauders killed 1 Archer.
3. His leadbelchers on the left wiped out the Leftmost unit of Reavers. I misplayed this move as well.
4. The Frost Mammoth shot a bunch of weird stuff at the other unit of reavers and killed 1 of them. 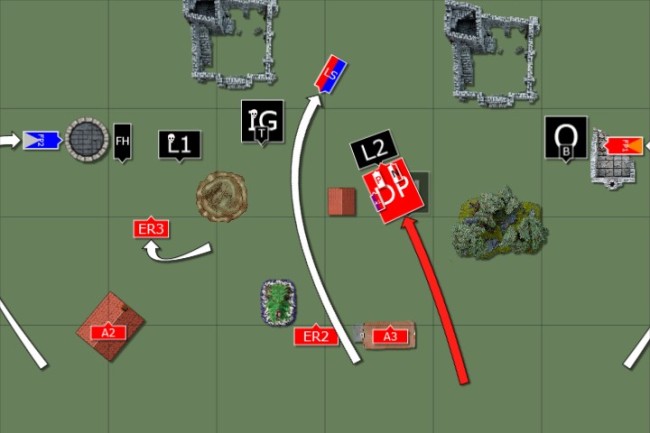 Movement:
1. My Dragon Princes charged the Maneaters and made it!
2. I moved my Phoenixes up on the flanks of his line.
3. The Reavers on the left shuffled around a bit.
4. The Reavers in the middle rallied.
5. The Chariot moved up behind the house. (Tournament I’m preparing for has ruled it can march because of the Fly Special Rule, waiting on FAQ to clear it up)

Magic: 10 v 6
1. I cast the big version of Walk Between Worlds on the Skycutter. I would have used it on the Fire Phoenix, but he was a couple inches too far away. I spun him around to face the rear of the Ogre Line.
2. I tried to be Cheesey and cast Drain Magic on one of his units just to pump up the Lore Attribute and he dispelled it.

Combat:
1. My Prince did 4 wounds to the Maneaters
2. My Noble did another 4 wounds after chugging the potion of foolhardiness.
3. My knights did another 7 wounds.
4. I lost 1 knight for my trouble.
5. He needed snake eyes and broke. I ran him down and hit the leadbelchers! 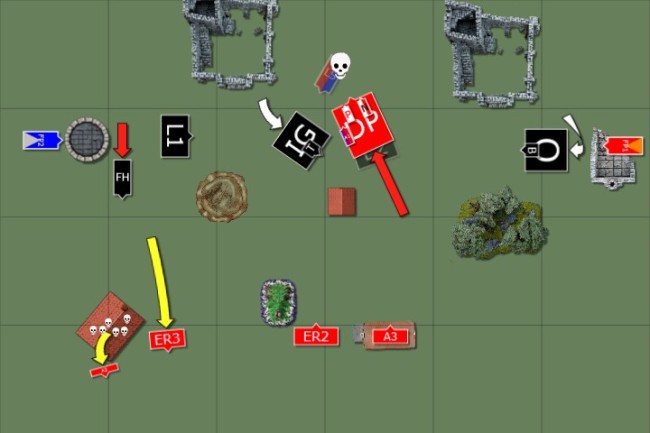 Shooting:
1. The Leadbelchers nuked my chariot! What a bummer. I had such high hopes for him.
2. His Frost Mammoth shot the crap out of my archers in the house. He killed 6 total. I don’t believe we resolved this correctly, and I failed at searching the rulebook quickly to find out. My opponent was a little impatient and so to just keep the game going I had the archers flee the building. 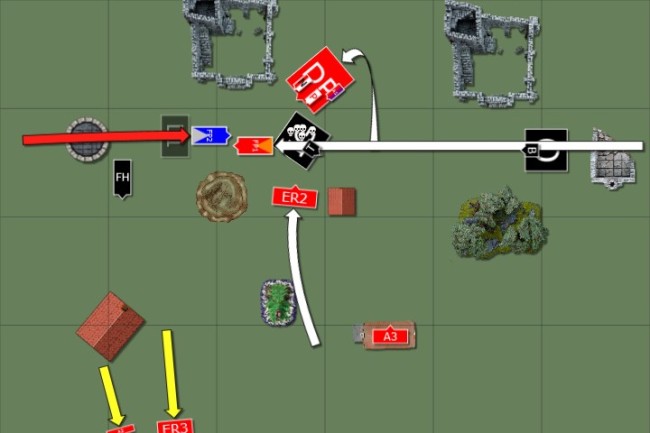 Movement:
1. The Frostbird charged the rear of the leadbelchers.
2. My Reavers and archers both failed to rally and went off the board!
3. The Firebird flew over the Ogres and put 1 wound on them.
4. I moved the reavers up to shoot at the flank of the guts.
5. I got the Dragon Princes up out of his Charge Arc.

Magic: I forgot to right down the winds roll. I also forgot to check how it affected the Phoenixes.
1. I cast Walk Between Worlds on the Phoenix and moved it over the guts and did 5 wounds!
2. I cast Drain Magic on the guts to just pump up my wardsave on the knights.

Combat:
1. The frostbird put 1 wound into the belchers and they failed to do any in return.
2. The belchers broke from combat and the bird ran them down going 12″ forward. 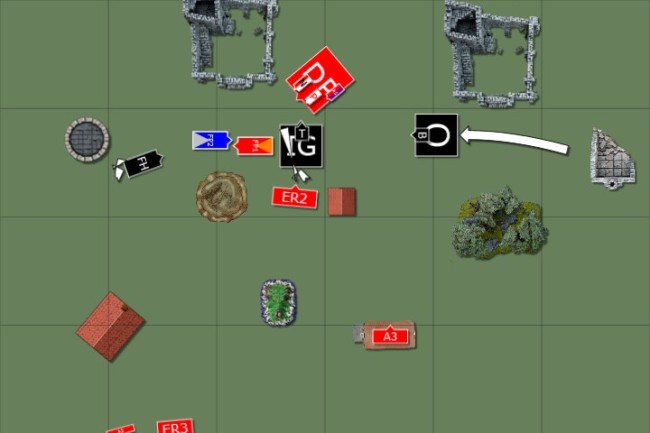 Magic: 7 v 5
1. He cast bonecrusher against my cav. I let it through, because of the BotWD ward save.
2. He failed to cast the Maw.
3. He tried to use the Ruby Ring as well, but I dispelled it.

Shooting was ineffective with the Mammoth. 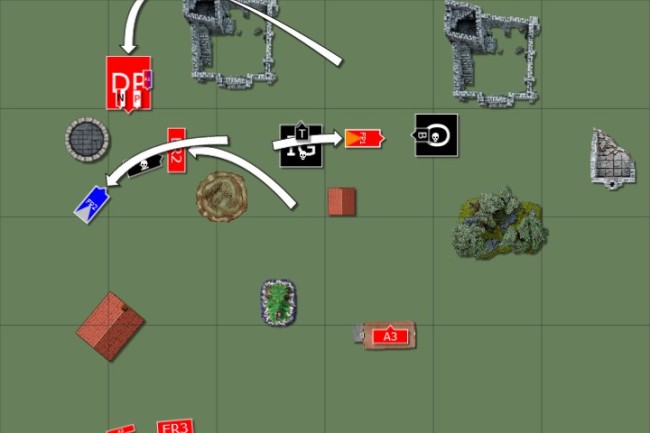 Movement: The diagram is a little wonky here.
1. My Dragon Princes could charge his gut bus. It was not nearly as obvious as it looks in this picture. My opponent didn’t think it could. We got the measuring tool out and it was doable, but not by much. He was getting frustrated so I chose not to anyway.
2. I moved the princes around to threaten the stonehorn. The ruins wasn’t nearly as big as it looks here. This move was not as crazy as it looks here.
3. The bird flew over the guts and did another wound.
4. The frost turkey moved to threaten the rear of the Frost Horn.
5. I used the Reavers to block the horn from moving.

Magic: 8 v 6
1. I used Khaine’s ring on 2 dice, but he was able to dispel it.
2. I tried to cast walk on the fire turkey, but he used his dispel scroll.
3. I tried another lame drain magic, but he dispelled that as well. 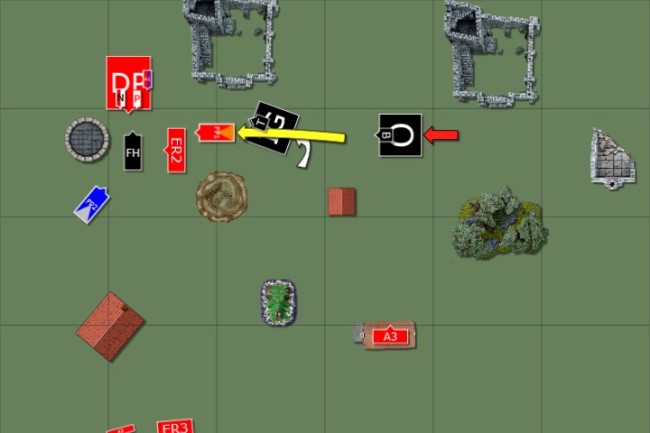 Movement:
1. The Ogres tried to charge my bird. I fled and they stumbled up.
2. The Mammoth turned to face my cav.
3. The guts moved a bit to try and get toward the left.

Magic: 4 v 3
1. My reavers weren’t in his front arc, but I didn’t say anything. He used the ring to try and get my reavers. I dispelled it w/ 2 dice.
2. He cast the Maw on my Fire Chicken, but it scattered off. 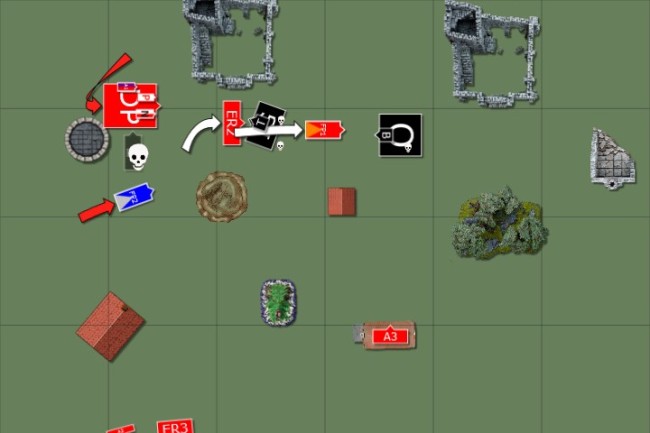 Movement:
1. The Princes and Frost Turkey combo charged the Frost Mammoth.
2. The fire chicken rallied.
3. The diagram is a bit off. I put my reavers between the fire chicken and guts. I nudged some things around to make it look more correct.

Shooting:
1. My archers put another wound on the Ogre Block.

Combat:
1. My Prince put 3 wounds on the Mammoth.
2. The Noble did 2 and finished it off.
3. Both Units reformed to face the center.

Movement:
1. His Guts charged my reavers. I fled and bounced through the princes.
2. He redirected to charge my Princes. I decided to stand and take it. If the combat went two rounds, I was in position to bring in the Ice Chicken.
3. His Ogres charged my Fire bird. I fled and he stumbled up.

Magic: 9 v 6 (my notes are a little hazy here)
1. He cast bonecrusher at something. I dispelled it.
2. He tried to put the Big Maw on something, but rolled a misfire. I put the template on his Ogre bus and rolled a direct hit!
3. He started cursing up a storm and sweating bullets. After all of the initiative tests he only did 7 wounds.

Combat:
1. I challenged his tyrant with my Prince. In hindsight this might have been a very reckless move. His general had a sword that made him I10 so I did not get re-rolls to hit. Luckily I still managed to get 2 wounds through his 4 up ward. I took 1 in return.
2. My Noble did 3 wounds.
3. The unit did another 2.
4. 2 Knights died.
5. I won combat by 6 and he had no bsb. The unit fled and I caught it.
6. The diagram is bad here too. My cav bounced 1″ past my fire chicken and were a couple of inches from the Ogre bus all set up to charge next turn.

At that point, my opponent conceded the field.

Victory to the Asur!

1. I think my opponent’s list needs some work. He was also totally unprepared to deal with how much this army can move.
2. I dictated when and where combat happened and brought overwhelming force to each fight. This was a classic High Elf Victory in that respect.
3. I was intimidated by this list, becasue of the MSU like character of it. I am definitely more confident in my ability to play it.

This guy definitely brought the pain to the rank and file. He also went toe to toe with a Tyrant and walked away the victor. What else is there to say?

This guy also brought the pain. He took no wounds and his lance was the perfect compliment to my Prince on the charge.

I really was not able to pump my ward saves up as much as I liked. I just had too many direct damage spells to be totally useful. Otherwise he did exactly what I needed him to do. I am also less afraid of not having a scroll. The book re-rolls were very useful on a couple dispel attempts.

They were 3 for 3 in combats and protected my characters. I can’t ask for much more.

They killed some ogres. I’m mad at that one unit for not rallying though!

I think I really misplayed these guys. With a more competent general, I think they could have earned an A

This thing just got nailed by those belchers. I’m looking forward to seeing what it does in the future

This is a really nice unit. It busted a unit of leadbelchers and helped shield my character bus from harm during the fight with the mammoth. He is a keeper

The bird did not earn his points back in wounds, but he severely aggravated my opponent. I think against a T3 infantry army he will do waaaay more damage. With all that said, I’m not sure I would run him if I weren’t running High Magic.