I played a serious and intense game yesterday against a Vampire Counts army that has just cut a swathe through the league I am playing in.

I don’t have a copy of his list so I don’t know how his characters were kitted out other than his general had the Sword of Anti Heroes.

We played a special scenario that went like this!

A River Runs Through It!

Spring has sprung and the army is on the move after a long winter in base camp.  Morale is high and new recruits have swollen the ranks.  Eager to seize an early victory, you have followed the scouts into a narrow valley.  Unfortunately, snowmelt has poured down from the mountains and a raging torrent of a river has split the valley in two.  To make matters worse, an avalanche has temporarily blocked lines of retreat.  Battle calls, but beware the river that runs through it!

Players shall then roll for D3 + 3 pieces of terrain.  This terrain can be randomly generated according to pg. 142 of the basic rulebook, or players can reach an agreement between them concerning what types of terrain are used.  However, any terrain pieces that are not buildings shall be Mysterious Terrain.

Roll off and then alternate placing terrain.

The battle is to follow the rules for the “Battle for the Pass” scenario on pg. 146 of the brb.

The game shall end after turn 6 or at any time a player’s army is wiped out.  If a player chooses to concede, determine Battle Points according to the 2500+ VP difference section of the scoring chart.

“Get in there and fight! Just don’t fall in…”

+2 Force them into the drink!

To achieve this objective, you must complete a charge against an enemy unit with at least 1 model touching the river, while keeping your own unit out of the river.  If the enemy breaks from combat and you pursue or fail your restraint roll and make contact with the river as a result, you will not achieve this objective.

Your disgust for your own scouts has carried over to the enemy.  In order to achieve this objective, you must destroy by any means necessary an enemy unit with one of the following special rules:  Skirmishers, Fast Cavalry, Ethereal, Fly, Sea Creature, Strider, or the Deployment Special Rules: Vanguard, Scout, or Ambushers.

If there are no enemy units who possess these special rules, you may achieve this objective by killing an infantry unit armed with Missile Weapons and no better than a 5+ Armour Save.

+1 Have 3 fully painted units on the table

Total Victory points up for both players and then consult the VP Difference Table to determine Battle Points.  Fill in the Score Card with this information and any Bonus Battle Points Earned.  Initial the bottom of the page and turn it in to the store manager. 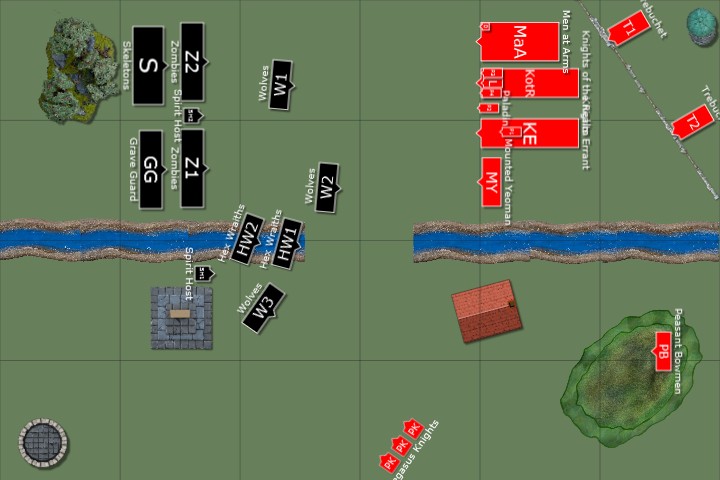 Damsel – Transformation, Flock of Doom ( I thought it might be useful for dealing with all of his ethereal units)
Prophetess – Wyssan’s, The Savage Beast of Horros, Pann’s Impenetrable Pelt, Amber Spear (for busting ethereal as well)

I attempted to at least pretend I was going to put some of my units on the south side of the river, but everything ended up on the north side regardless of my poor attempt at subterfuge. I placed the bowmen and Peg Knights first as part of that.

He did the obvious thing and put his ethereal stuff in the river and put his combat blocks across from mine. He did make a mistake though with his zombies as they just served to create a traffic jam and keep his Grave Guard out of the fight till the very end.

My Peg Knights made a small vanguard move as did his Hex Wraiths and Wolves.

My army prayed, so he went first. 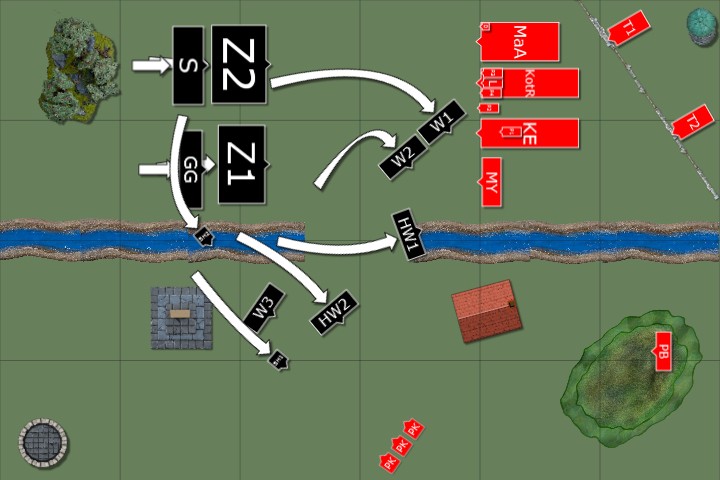 Movement
1. His Wolves moved up to try and block / redirect my Knight Busses, which came to haunt him here in a bit.
2. His units south of the river moved to try and threaten my Peg Knights.
3. The one Hex Wraith Unit moved up to threaten the flank of my combat blocks.
4. His infantry moved up.

Movement: This looks crazy so I’ll go through each of these one by one.
1. I moved my Men at Arms up 4″ to protect the flank of my KotR.
2. I charged my KotR unit into his Wolf Unit. It was flank all the way, but because I could not close the door (because of the length of my unit) he was forced to close the door.
3. My BSB packing a magic sword and +2 combat res (BSB and Virtue of Duty) moved back to eventually come around and deal with those Hex Wraiths. (The enemy had no shooting so I left him free like this intentionally so that I could deal with some of his ethereal)
4. My KE did the same as my KotR.
5. I charged my Mounted Yeoman into the front of those Wolves after they closed the door with my KE. I did this to help block my knight bus from charges.
6. I moved the Peg Knights out of the Charge arc of the spirit host.
7. My peasants hightailed it to the house so they could eventually shoot some bad guys from a safe-ish location.

Magic went 8 v 5
1. I turned my Damsel into a Great Fire Dragon with IF. 4 peasants died and I lost my left over power dice.

Shooting
1. Both Trebs scattered while attempting to shoot the GG. One shot did land on the south Z unit and killed 17. 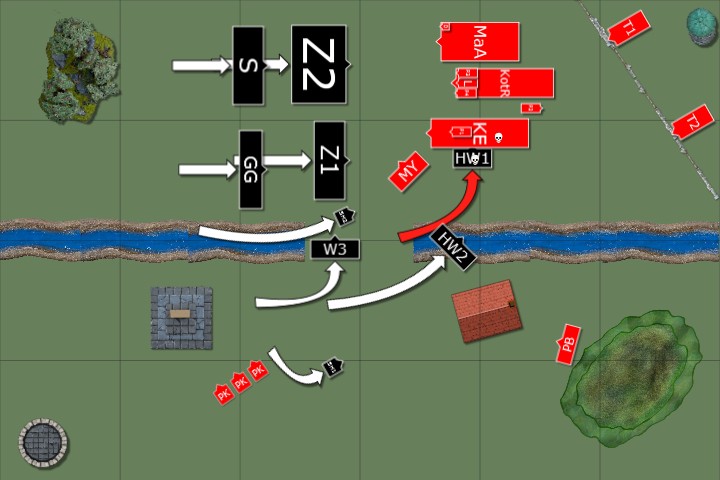 Magic went 6 v 4
1. He used 1 dice to cast Vanhal’s through a bound item. I dispelled this.
2. He threw 5 dice at dispelling my dragon and did so. I was perfectly ok with this as it robbed him of a magic phase.

Movement:
1. My Men at Arms and KotR charged the North Unit of Zombies.
2. I put my Mounted Yeomen into the south zombies to try and hold them up.
3. My BSB moved around to flank charge the Hex Wraiths. It might not be apparent in this picture, but it was impossible for his other Hexwraiths to charge him as he would have clipped his own unit.
4. The Peg Knights got behind the Vampire Lines so that they could charge either unit. It wasn’t as far as it looks on this map.
5. Bowmen got into the house.

Magic went 6 v 4
1. I threw 6 dice at Transformation and he used his dispel scroll to stop it.

Shooting
1. My treb tried to hit the GG, but scattered WAYYY off. It killed 10 zombies and 3 of my Mounted Yeoman!
2. My other treb landed smack dab on his general. He passes is Look Out Sir and I rolled poorly to wound. Only 4 GG died.

Combat
1. My Knights and Peasants killed a bunch of zombies and won combat by a ton. 5 peasants died. 16 zombies were left after crumbling.
2. My remaining Mounted Yeoman got 1 zombie then they ate him.

Movement
1. Correction – The General and Necromancer were always in the GG unit. During this turn and the last, the BSB who had been in the skeleton unit joined the GG. My opponent knew what was coming and got hm to safety.
2. The Skeletons moved up.
3. The GG moved up and wheeled a bit.
4. His wolves moved into position to be able to flank something.
5. Spirit Host and Hexwraiths moved to get my artillery.
6. The other Spirit Host realized it was pointless to go after the bowmen and moved toward the action.

Magic went 7 v 6
1. He tried to revive some GG with his lvl 2 with 2 dice. I dispelled this attempt.
2. He tried an invocation with his bsb on 2 dice, but failed.
3. His general also went the same route and failed his casting roll as well.

Combat
1. My KE killed 5 Zombies. The Hex Wraiths got 1 knight. I won combat by 2 and 2 zombies and 2 wraiths crumbled.
2. My KotR and Peasants killed more zombies. 1 peasant died. The Rest of the Zombies crumbled. 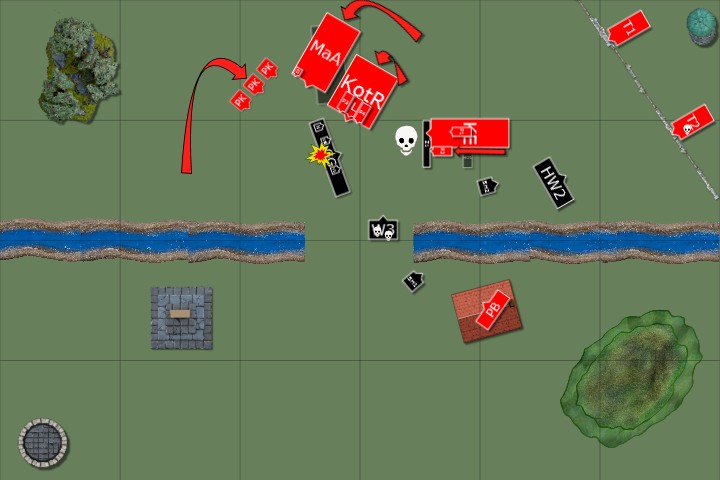 Movement
1. Peasants, KotR, Peg Knights – all charged the Skeletons
2. My BSB hit the Hexwraith and overran into the Zombies.

Magic went 8 v 8
1. I threw 6 dice at Transformation and rolled a 28! Unfortunately my opponent matched the roll.
2. I used my remaining dice to put Wyssan’s on the peasants, which was dispelled.

Combat
1. My KE killed 6 zombies and won combat by 9.
2. Things get crazy. My Men at Arms, KotR, and Peg Knights did 28 wounds and won combat by a ton. 5 peasants died and the remaining skeletons crumbled. I had a serious problem though. His vampire Lord (with the sword of anti heroes) and GG had a wide open flank charge on my KotR unit.

To avoid this, I did some very clever reforming. My knights had to cut the length of their unit so they went 5 wide to insure a front charge. I knew it was coming, I just hoped they would hold. (I also did the sneaky move from the last White Dwarf and had my Lord in the 2nd rank so I could make way where I wanted his Heroic Killing Blow).

My Men at Arms reformed so they could make a counter charge. My Peg Knights got ready for a flank charge.

I was really banking on my KotR holding so I could then get the other flank with my KE after the rest of his zombies crumbled.

Movement
1. His GG charged my KotR unit.
2. He moved his wolves way far away from my bowmen to try and protect them and threaten the flank of my Peg Knights. (It wasn’t as far as it seems here)

Combat
1. His GG killed 9 knights and 1 paladin. My General killed his BSB. His general killed my unit champion in a duel and wracked up a ton of wounds. I ended up losing combat by 6 and broke, fleeing off the table. He then overran and hit my Men at Arm sin the front.
2. My KE and BSB finished off the Zombies.
3. His Hexwraiths busted my Treb and purused off the table. 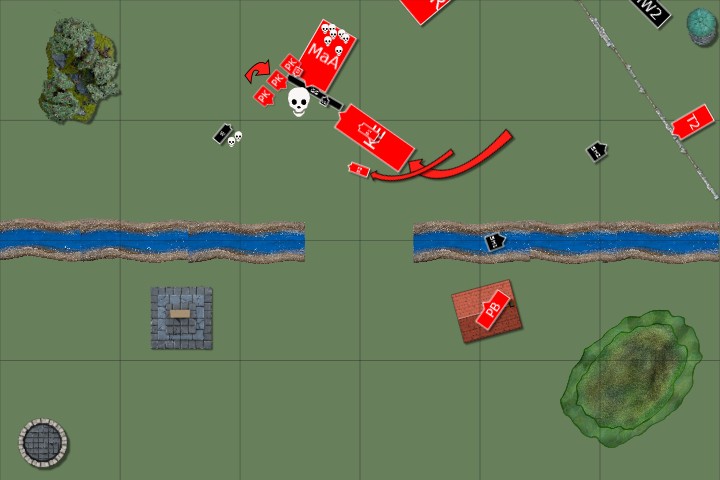 Movement
1. Pegs & KE charged the flanks.
2. My BSB failed a long charge to those wolves. It looked much more realistic than this.

Shooting
1. My bowmen went all Robin Hood and managed to kill 2 wolves. They were 2 inches from being out of my max range.

Combat
1. My Peg Knights got the Necromancer. Together my units killed 9 GG and 9 more crumbled. 7 Peasants died.

Movement
1. His Spirit Host charged my Treb and made it.
2. His Hex Wraiths returned.
3. The other Spirit Host moved to support the main combat.
4. He got his remaining wolf out of dodge to preserve points.

Combat
1. I killed 7 GG, he killed 6 peasants, but I won combat by 7. After crumbles, only 3 GG and his General were left.

Movement
1. My Peg Knights ended up out of combat, because of how his unit shrunk last turn. They charged the flank again.
2. My BSB moved up to support, but did not charge. I was not about to feed him my BSB.

Magic went 6 v 3
1. I tried for Wyssan’s with 3 dice. I was conservative here as it was the only spell I had left to help me, but did not want to miscast and lose a bunch of knights. He dispelled it.

Combat
1. His General challenged and did 5 wounds to my KE Champion. My other units killed the last of the Grave Guard. I won combat by 3 and his General crumbled!

That was game so we called it at that point.

This was a very difficult and intense game of Warhammer. I am really happy I came away from it with a victory. After consulting the scoring instructions for the scenario, I came away with about 1,000 more Victory Points than him and Battle Points ended up being 15 to 10 in my favor.

This was a league game and up to this point, my opponent had just crushed everyone who faced him.