I played a game for a slow growth league recently against a skaven opponent.  Unfortunately, I did not play this game well at all, had a string of unfortunate occurrences, and nubbed it up all around.

Learning can be painful!

This is the list I ran, which I’m not really that big a fan of in hindsight.

My opponent’s list (which I did not do a good job analyzing pre game) looked like this:

The scenario was a custom job.  It went like so!

The Campaign Season has begun.  Whether your commander is on the march for glory, plunder, conquest, or even bloody revenge, shrewd reconnaissance is critical to success.  Ahead lays a hill that should afford a commanding view of the surroundings.

Place a large hill in the center of the battlefield.  This hill is a standard hill and follows none of the rules for Mysterious Terrain.

Players should then roll for D3 +3 pieces of terrain.  This terrain can be randomly generated according to pg. 142 of the basic rulebook, or players can reach an agreement between them concerning what types of terrain are used.  However, any terrain pieces that are not buildings or the central hill shall be Mysterious Terrain.

Roll off and then alternate placing the remaining terrain.

Players should then roll off with the winner choosing which half of the table he will deploy in and then follow the instructions given for Alternating Units on pg. 142 of the brb.

All Deployment Special Rules are in Effect.

The game shall end after turn 5 or at any time a player’s army is wiped out.  If a player chooses to concede, determine Battle Points according to the 1500+ VP difference section of the scoring chart.

To achieve this, you must have at least one unit located completely within the boundaries of the hill with no part of any opposing unit touching the hill at the conclusion of turn 5.

To achieve this, at some point during the game, your general must enter the boundaries of the hill.  The general does not have to remain within the hill to receive this bonus.

To achieve this, at some point during the game, your BSB must enter the boundaries of the hill.  The BSB does not have to remain within the hill to receive this bonus.

+1 Have a fully painted unit on the table

Total Victory points up for both players and then consult the VP Difference Table to determine Battle Points.  Fill in the Score Card with this information and any Bonus Battle Points Earned.  Initial the bottom of the page and turn it in to the store manager. 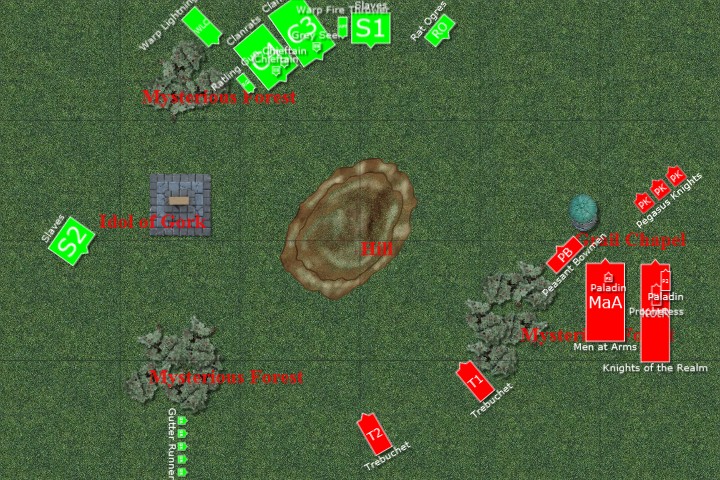 Table was divided down the middle diagonally and armies had to deploy 12″ from that center line. This made for a very small deployment zone. Of course, I did myself no favors here. I should have put the trebs further back in the right corner and put the Men of Arms where the trebs were. I also should have put my Knight Bus were the Bowmen were placed and then put the Bowmen up around the right side of the grail chapel.

At the time, I was trying to get cute and take advantage of the Grail Chapel and then run the knight bus down the flank of the skaven army. 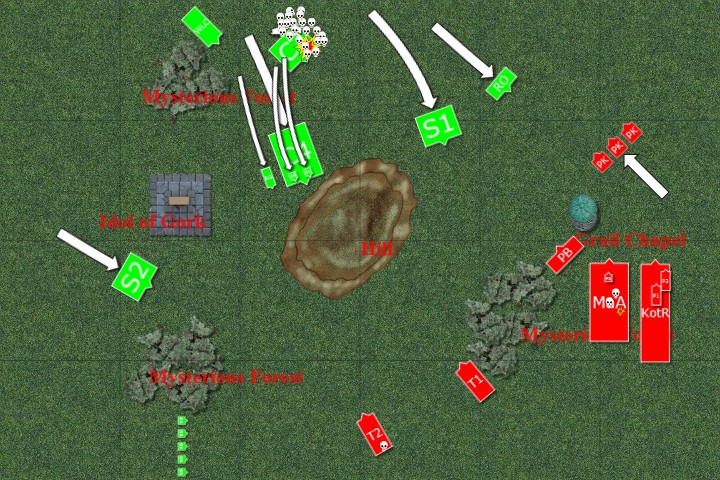 Peg Knights made a small vanguard move and then the Army Prayed.

The infantry moved up as shown while the Gutter Runners appeared to the left of my Trebuchet.
The Skaven Chieftain in the C4 unit fed the clanrats the Skaven Brew giving them the crazy frenzy for +2 attacks, but the unit would then suffer d6 automatic wounds each compulsory movement phase.

Magic
It was 12 (s) v 6 (Bret).
Death Frenzy was cast on the unit of Slaves, I let it through.
The Grey Seer threw 5 dice at howling Warp Gale and it went off with Irresisitble Force. He rolled a 4 on the miscast chart resulting in a big explosing killing 23 clanrats and also sucking him into the warp!
The Clanrat unit failed it’s panic test and fled 2″. The Diagram isn’t quite right as they stopped just at the table edge.
The Warpfire Cannon also paniced and did flee off the table!

The Warplightning  Cannon managed to kill 2 Men at Arms.
The Gutter Runners put a wound on the Treb with shooting. Spacing is probably off on the diagram as they were in range to hit it. 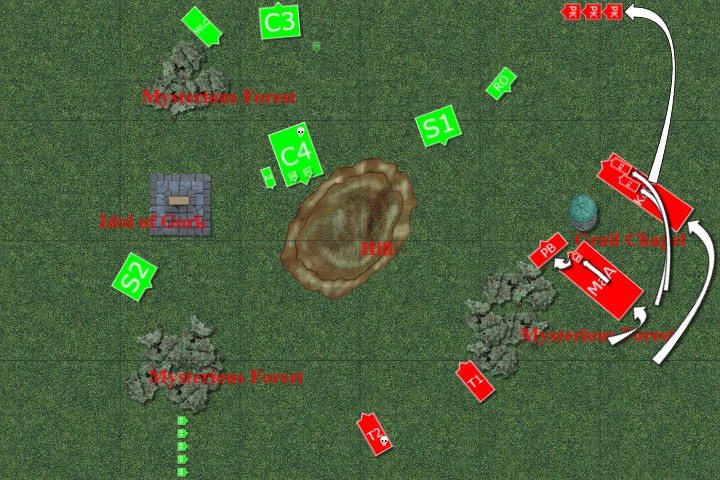 Things were looking good at this point. I had a level 4 wizard and my opponent now had no magic phase! Clear Advantage Bretonnians!

Unfortunately, I continued to pay the price for my poor deployment. I moved the Men at Arms up behind the bowmen and shuffled the bowmen over to the left.
My Peg Knights couldn’t fly, but the pulled some fast cavalry goodness and moved up out of the charge arc of the rat ogres and reformed into a conga line.
My KotR unit moved up to prepare to charge those Rat Ogres.
Magic
I had 6 power dice and he had 3 or 4 dispel dice.
I put Throne up with 4 Dice and then threw 2 dice at Flesh to Stone on the KotR unit which was dispelled as he threw all of his dice at it.

Shooting.
My Archers forgot how to shoot and did nothing.
A Treb Misfired.
The other managed to kill a whopping 1 clanrat! 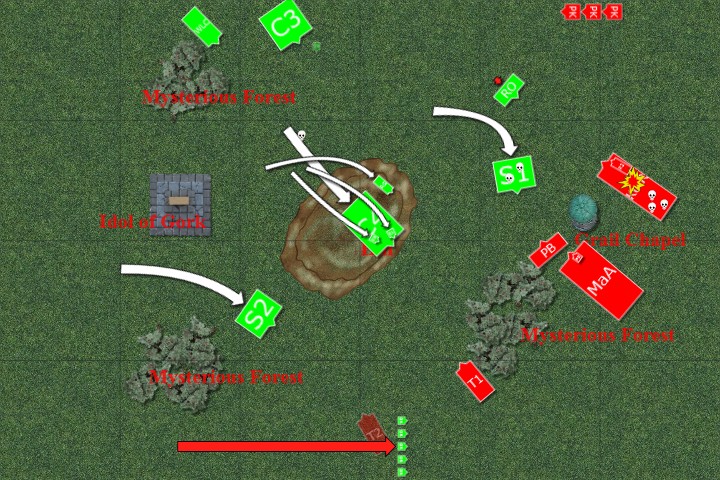 The Rat Ogres attempted to Charge the Knights and failed moving 1″.
The Gutter Runners Charged my Trebuchet and made it! It was closer than it appears in this picture.

The Unit of Clan Rats right by the board edge rallied!, bad luck for me.
The other units of Infantry moved as shown.
2 Clan Rats died to Death Frenzy and 1 died in the other unit from the Brew.

This is where disaster struck.
The Warp Lightning Cannon hit my Knight Bus killing 3 knights and my Prophetess!
There went my magic phase! 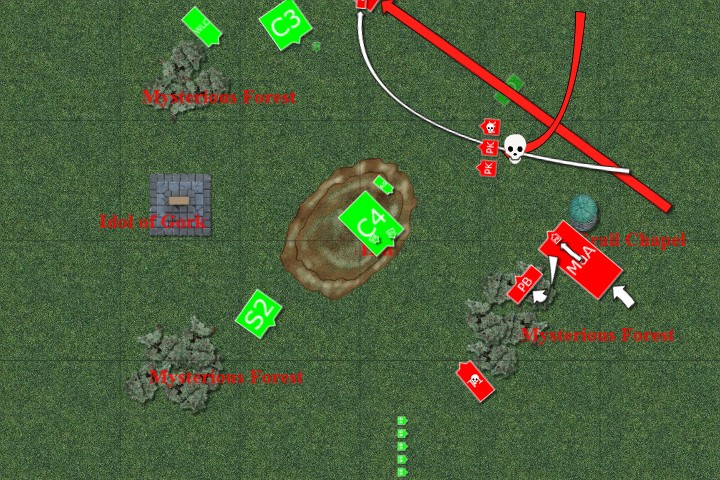 The Peasant Bowmen got into the forest and out of the way of the Men at Arms. The Forest ended up being a wildwood, but the peasants took no wounds.

My shooting failed again with my peasants not hitting anything and my trebuchet misfired suffering a wound!

My Heroic Killing Blow BSB failed to do a single wound.
The other Knights managed to inflict 4 wounds killing 1 rat ogre and the packmaster.
The Rat Ogres put a wound on my bsb despite his 1+ save and ward save, and killed 1 other knight.
The remaining rat ogre broke from combat.
I tried to reign them in, but failed the leadership test twice and my knights pursed the Rat Ogre right off the board.
The diagram is a bit deceptive as compared to the real game.

My Peg Knights fought like champions killing 6 skaven and only taking 1 wound back.
The slaves then busted and did not inflict any further wounds removing them from the game.
The Peg Knights then reformed to face west. 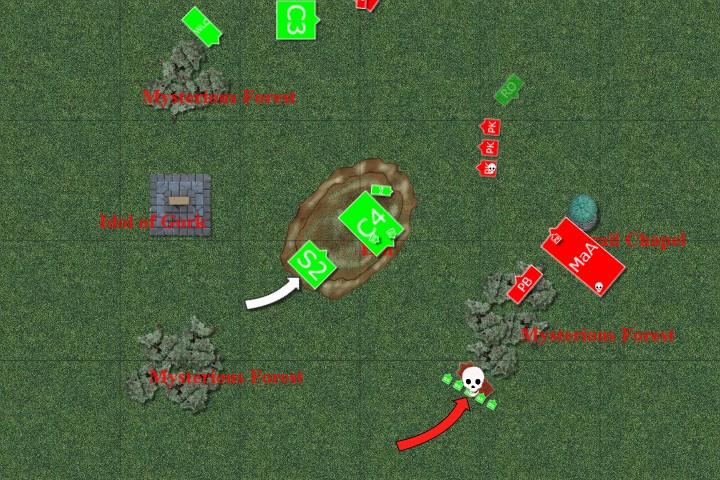 This was a quick turn.

The Small unit of Clan rats reformed to face the direction my knights would come back on the board during the next turn.
The Big Unit of Clan Rats stayed put to claim the hill.
The unit of slaves moved on to the hill to back them up.

Gutter Runners charged and destroyed the trebuchet in combat, but rolled snake eyes or another very low number on the overrun.

The Warp Lightning Cannon did a wound on the Man at Arms unit and the ratling gun put 1 wound on the peg knights. 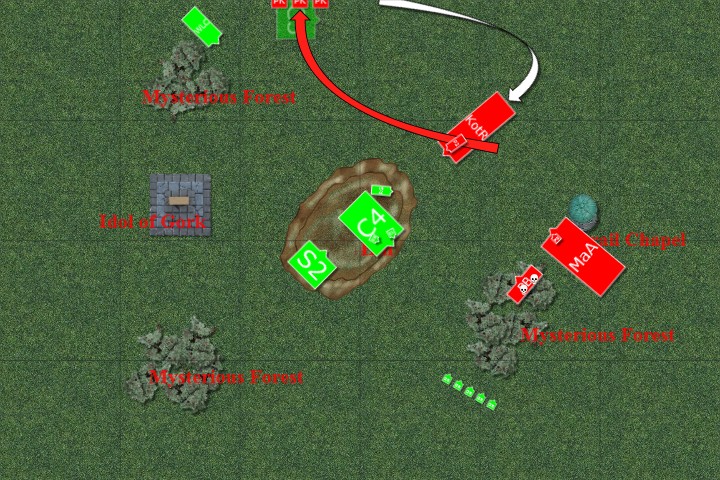 Please pardon the diagram a bit here. These moves were much more realistic than they might seem here.

1. The Knight Unit came back on the board and turned to prepare for a charge on the unit on the hill.
2. The Peg Knights made a charge into the flank of the Clanrats and did 6 wounds while taking none! Unfortunately they failed their restraint test and pursued the clan rats off the board.
3. My shooting was ineffective and the archers took 2 wounds from the wild wood for their trouble. 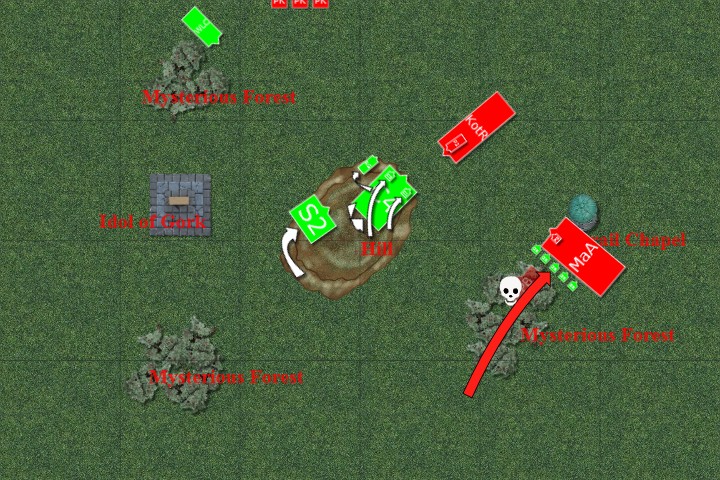 1. The Rats on the hill turned to prepare for my knight bus.
2. The Gutter Runners charged through the wild wood and destroyed my Peasant Bowmen and then went into the flank of my Men at Arms unit preventing them from getting in position to aid the knights during the next turn.
3. The Ratling Gun fired at the knights, but ended up doing no wounds.
4. The Warp Lightning Cannon misfired in such a way that it fired off the table. 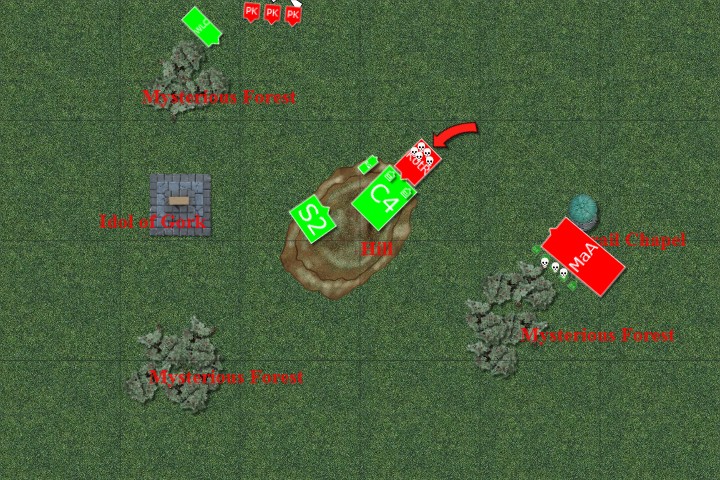 1. I made the mistake of the game. I really did not study my opponent’s list so I was utterly unprepared for what was waiting for me in that Clanrat unit. My Knights made their glorious charge and died in droves. The Ratling Gun misfired for the stand and shoot doing no wounds, but then an assassin jumped out and assassinated my BSB, the two chieftains did a plethora of wounds, and the weeping banner plus skaven brew also came into play to devastating effect. As a result, 5 of my knights perished, but due to the rest of my guys fighting like champs, the charge, and the Warbanner, I won combat by 1.

2. The combat with my Men at Arms unit also went poorly for me. I made way with the Knight leading the unit who promptly did no wounds and was murdered by the Gutter Runners for his trouble! The peasants finished off the Gutter Runners though.

3. My Peg Knigths came back on to the table in position so that they could charge the WLC or attempt a long charge on the units on the hill. Again things were closer than they appear here. 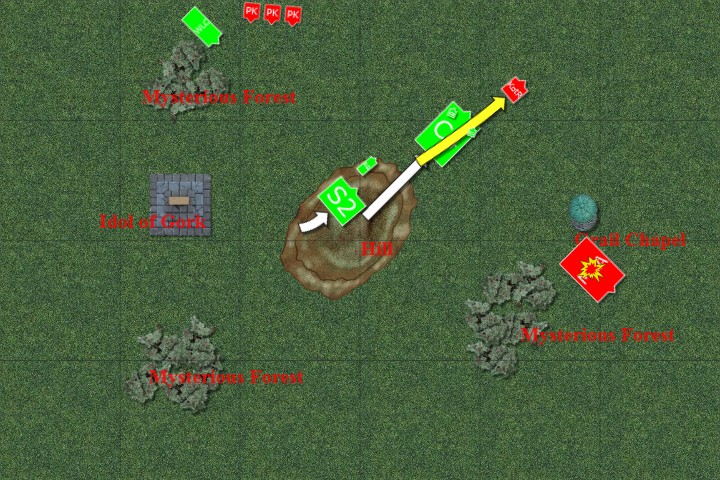 1. The Knights failed to wound, 3 of them died, and the remaining 2 broke from combat fleeing 12″. The Skaven pursued 10″ not catching them.

2. The Slave unit moved completely on to the hill to claim it as per the requirements of the scenario.

3. The Warp Lightning Cannon dropped the bomb on my Men at Arms unit. It hit 22 of them and caused 13 unsaved wounds. Without the knight to lead them, they failed their leadership test looking for a 5 or less and fled 5″. 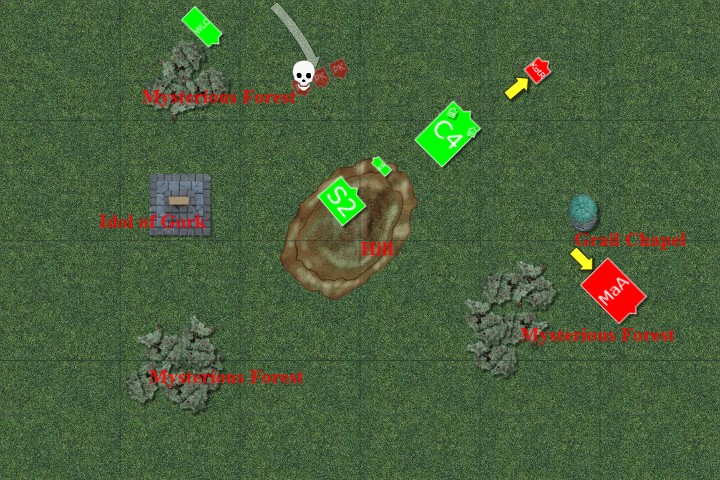 The scenario called for the game to end after turn 5 so this was my last chance to make something happen.

1. Losing the victory point battle, I decided to try for a long shot gamble to take the hill. I had my peg knights charge the Ratling Gun hoping that when it was destroyed, the slaves would panic and flee off the hill leaving it in my control. Unfortunately, the Ratling Gun destroyed them with its stand and shoot.

2. The KotR unit failed to rally.

3. The Men at Arms unit also failed to rally.

All of this resulted in a total wipe out and a huge victory for the skaven!